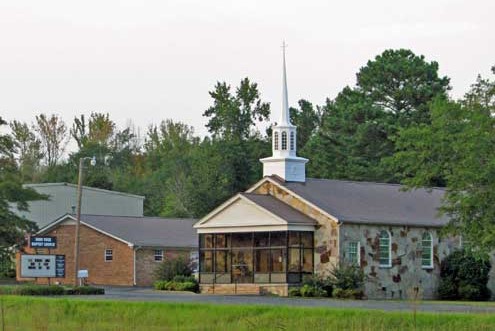 The exact date of Baptist worship in the Sand Rock community is not known, but from information received and the earliest records available, the first church was built in the early 1890’s.  Mr. Leander Copeland gave land for a church and cemetery on the road from Sand Rock to Collinsville.  This church was called Mt. Lookout, and was located near the Mt. Lookout cemetery.  This church burned, and the congregation formed two churches which were located less than a mile from each other.  The present church grew out of these two churches when they united.

Bro. Jon Appleton, Mrs. Ophelia Pearson’s uncle, was pastoring a church at Spring Garden, and in visiting the community after Mt. Lookout Church had burned, was very concerned that there was no Baptist Church in the community.  He felt that there should be a place of Baptist worship, so he got in touch with some of the citizens of the community, which was known at that time as Hogue’s Cross Roads. A Mr. Hogue owned a store there, and the post office and store were located at the cross roads.

Some of the members of this organizational committee were: Mr. John Sims, Mr. Mike Beck, Mr. P. C. Copeland, and Mr. Wash Mitchell who served as church clerk.  Bro. Appleton was the first pastor and served seven years free gratis.  Sometimes members would give him produce such as corn, potatoes, syrup, meat, etc.

This church was called Friendship, and it was located on the road from Sand Rock to Collinsville, just beyond the W. D. Pearson home.  The name of the other church was Bartlett Church, and their place of worship was where the Winfred Stansell home now stands.  Later, the two groups united, and the name of the church was still called Friendship.  Since the name did not designate a location in the county and it was difficult to know exactly where Friendship was, the name was changed to Sand Rock Baptist Church in 1930.

The second pastor of the church was a Bro. Lackey, who was Mrs. Kizzie Cleland’s uncle.  Bro. Azra Sims followed Bro. Lackey.  Names and dates are not available for some of the pastors during this time, but Bro. J. N. McClung was pastor in 1910, followed, followed in 1912 by Bro. Yancey who served one or two years.  Other pastors were a Bro. Brown, Bro. Jones, and Bro. Gus Gregory who lived to be around 100 years old.

Some of the earliest records show that Bro. A. M. Goss was pastor in 1923, followed by Bro. R. F. Mobley, who served until 1928. Bro. Joe Campbell and Bro. Parker were the next two pastors.

Mr. Frank Miller of Centre, Alabama, was in charge of building the new church which is constructed of flat rocks.  In March, 1952, a dedication service was held when the congregation moved from the old church to the new.  Even though the rock-work on the outside was not completed until later, services were held in the new church that day.  Bro. Claude King was pastor at that time, and it was a record day for Sunday School attendance with 172 present. Several former pastors were present and had a part on the program. The new church had a baptistry, 14 Sunday School rooms, pastor’s study, fellowship hall and kitchen, and a sanctuary which seats approximately 300 people.

Pastors who have served during the last eight decades include: 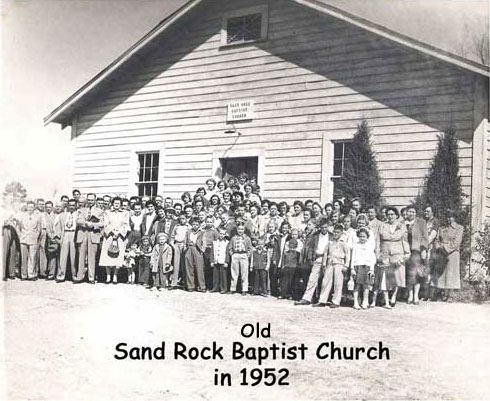 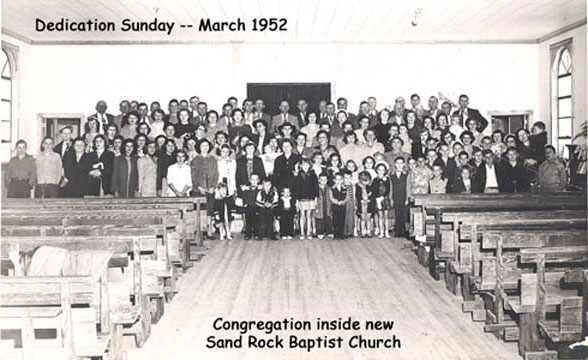 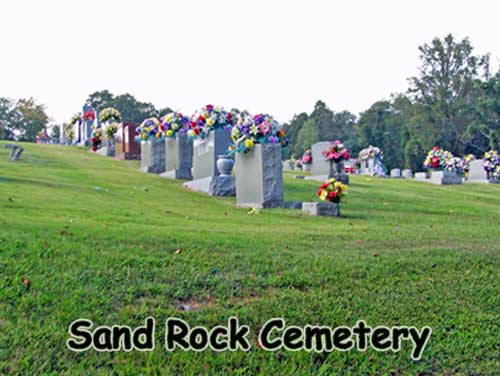 On the first Sunday in May each year, a joint homecoming service is held at Sand Rock Methodist Church, located a short distance away.  Graves in the cemetery are decorated in the morning, followed by a message from either the Baptist or Methodist pastor.  Members from both churches bring a covered-dish lunch and everyone enjoys a noon meal together.  An afternoon song service and business meeting are held.  Many former residents of the community always try to come back for this special occasion.